As a wedding photographer based out of Nashville, TN, and surrounding areas, I get the joy of meeting and becoming friends with my couples, right off the bat I knew that Austin and Kayla would be a dear couple to me during our time together and beyond. Their Engagement session took place at the Historical Downtown Franklin, which is known for their charming boutique shops, spas, coffee shops, restaurants and… just when Austin realized he did not put gel in his hair and it was a little bit messy,  he found a very nice hair salon that was more than happy to help him out!

How they met Historical Downtown Franklin

Kayla and Austin met when they were both only 18 at Austin’s then work, at the time Austin had a girlfriend, so they only pursued a friendship. After some time of being just friends, Austin knew that he wanted more with Kayla, although the thought of breaking up with his current girlfriend made him uncomfortable, he knew he had to do it. The final decision was made when Kayla and Austin were enjoying dinner together as ” friends” he then told her that his was breaking up with his current girlfriend so that they could be together. She wasn’t 100% understanding due to the fact she didn’t know that relationship was still on going, but welcomed the relationship to be taken further AFTER the breakup. Austin finally broke it off with his girlfriend to be Kayla’s boyfriend and set out to become the love of each other’s lives. Five years and a beautiful 2 year old daughter ( that looks just like Austin ya’ll seriously !) They finally got engaged.

Austin proposed on a complete whim, he  knew he loved her unconditionally,  that she is his partner in crime and his best friend. As you know they have a beautiful little girl that was a surprise blessing that altered timing and life in a good way! So he sought out the ring Kayla had expressed that she wanted, and he told her that his good friend was proposing downtown Nashville and they were needed to take pictures and video for them to ” capture their moment”. What Kayla didn’t know is Austin did not have a good friend getting engaged, but they were there for him to propose to her !  Kayla was totally surprised as Austin got down on one knee on the Pedestrian bridge  in the middle of the river and asked her to be wife. Well we do know that of course she said Yes 🙂

As mentioned above we chose to do their session in Historical downtown Franklin, it was such a beautiful November day in Tennessee. The shops were starting to get decorated for the holidays, and the small town warmth could be felt in the air. After Austin gelled his hair we were ready to go 🙂 I loved walking around and discovering new angles and backdrops that this quaint town held for our session, but what I loved most is getting to know these two. Their personalities really compliment each other’s, the way Austin twirled and dipped Kayla without taking his eyes off her told a story within itself and I was able to tell THEIR love story. Austin is a hard worker, not only in taking care of his family but in being a business owner, at Evolution tire company in which he brings tires to you ! No need to go and sit and wait in a auto body shop , you cant wait inside your own home. I wish these two all the best and cant wait to work with them again in the near future as they start planning their wedding OH and build a house at the same time! Thank you both for coming out to Historical Downtown Franklin for your engagement session 🙂 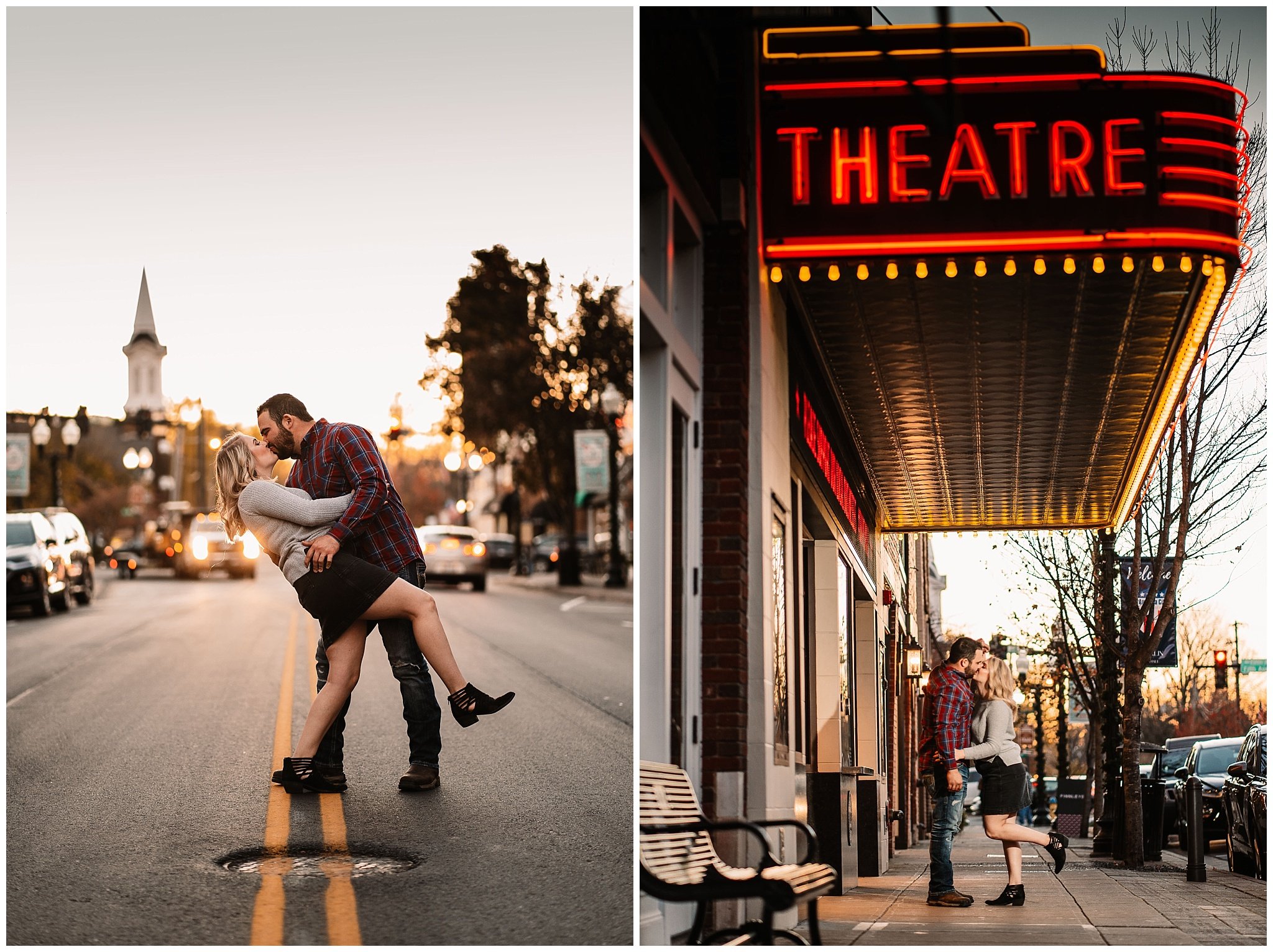