As a wedding  and couples photographer based out of Nashville, TN, and surrounding areas, I am blessed to do what I love and meet amazing couples ! Cholena and Brandon are not just so adorable ( I think we can all agree on that!) but brave as well ! We met for Cholena and Brandon’s  Downtown Nashville engagement session on a very chilly ( 32 degrees ) early Monday morning , last month. As cold as it was Cholena and Brandon were such troopers while we walked, laughed, and dipped our way across the pedestrian into downtown Nashville.

Cholena lives in Nashville, TN, and Brandon lives in Jackson TN ( about 2 hours driving distance).  They both attended the same university, Bethel University located in McKenzie Tennessee, but never met here in Tennessee. Cholena and Brandon finally met did meet though, thousands of miles away while on a missions trip in October of 2019  in Atenas, Costa Rica. Talk about Gods timing being perfect! They continued getting to know each other when returning to Tennessee even though there was is still some distance between them, and their relationship bloomed into what it is today, a beautiful relationship based on love and faith.

I love hearing all these stories about proposals, and Brandon and Cholena’s story is just as unique as meeting for the first time in Atenas, Costa Rican ! While on vacation at Disney World , Brandon suggested that they try a little adventure and go on a hot air balloon, neither one of them had ever been before. Even though Cholena is not a fan of heights and slightly terrified , she didn’t let her fear take over, knowing it would be a great experience for them to share together ,  and maybe even fun, she agreed.  It wasn’t until they were over 1000 feet up in the air balloon, that Brandon proposed to Cholena. Not only did they experience this adventure together, but this story and experience is one for the books and Cholena wouldn’t have it any other way.

Cholena and Brandon were one of my lucky couples who won a free engagement session from a contest I was running at the time. I just loved their story and really felt the connection with them from the first time we chatted. Even though our conversation began via text messages, Cholena made it apparent that they had faith , Faith in God, that he will open doors that need to be opened not only when it came to their wedding planning, but with everything in life.

We decided that downtown Nashville would be a prefect place to do their engagement session. It was certainly chilly for Nashville somewhere around 30 degrees , being originally from NY I am used to the cold somewhat, but I don’t take it for granted that everyone does in the south. They both showed up ready to rock their session ! Oh my goodness the cute pink winter coat Cholena picked out to wear was perfect ! We started on the Nissan Stadium side of the pedestrian bridge ( easy parking !) plus you get a great view of the city and the iconic ATT building ( aka the Batman Building) that can be great backdrops to any photos. We figured out that it would be easier to take the elevator to the top of the bridge, plus get a chance to warm up a bit ! Downtown Nashville has so many different areas and structures within walking distance that can be used to create and portray many different feelings and moods during one session.

I was so happy to see that the  fountains were still running despite the cold, and getting these two to cuddle for these images was certainly not an issue! One of the things I am known for is my use and eye for things that will add a ” pop” of color , and Nashville definitely never disappoints no matter what season. Nearing the end of our session Cholena and Brandon had a chance to perfect the dip in the street, and well they nailed it! We finished up by the iconic Goo goo’s candy store  in which I later found out is Cholena’s Moms favorite candy, this prompted me to look into the history of Goo Goo and found out its America’s first combination candy bar that was invented in 1912 right there in downtown Nashville! I have to go back there now and try one!

What a great session with these two, they are in the process of planning their wedding for Nov 6 , and I am beyond thrilled to continue to capture there love story. 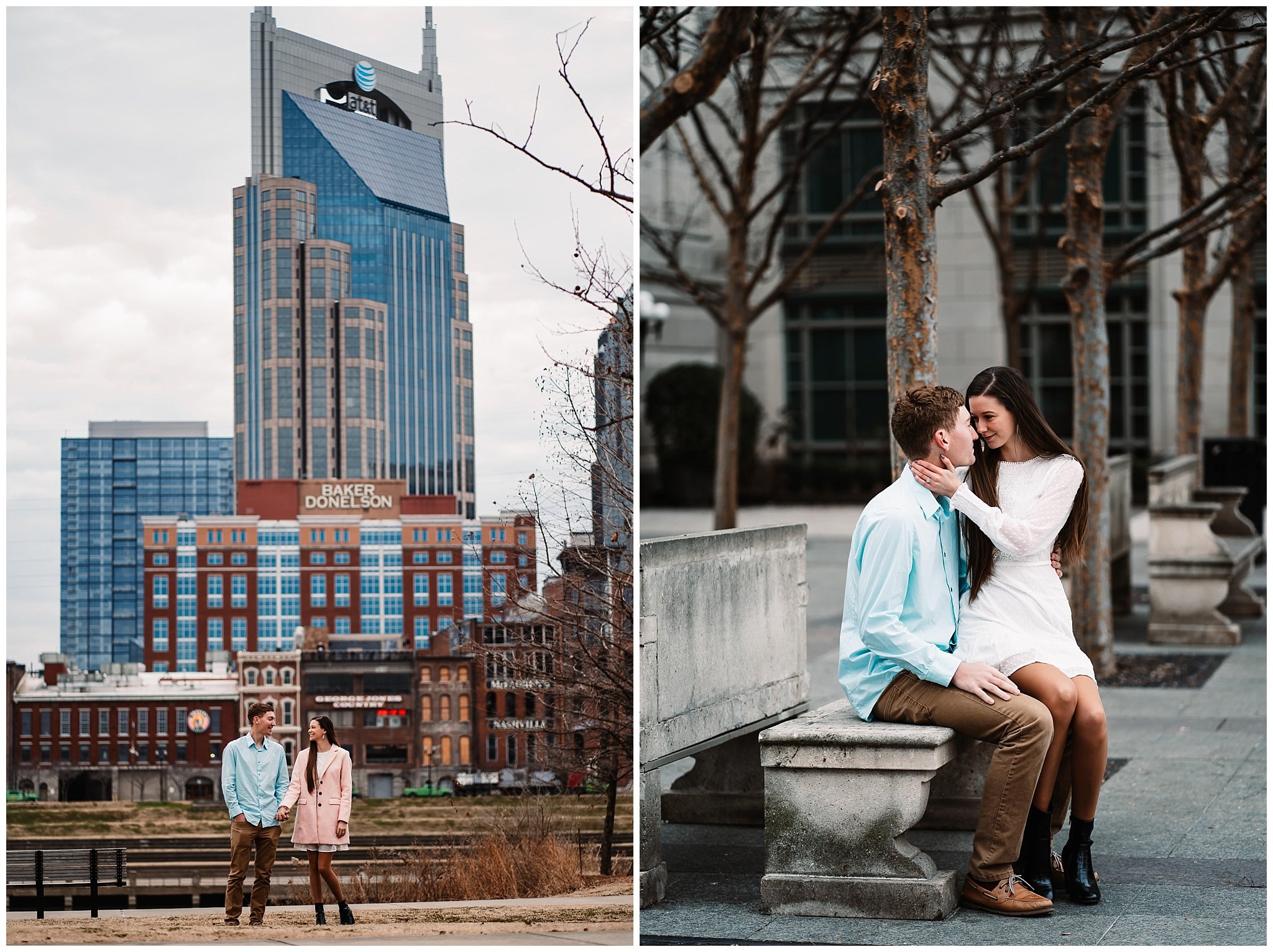