As a wedding photographer based out of Nashville, TN, and surrounding areas, I meet a lot of couples and I can honestly say we hit it off right off the bat.  Emily and Colin were an  absolute joy to photograph during their engagement session at the beautiful location at The Park at Harlinsdale Farm, located in Franklin, Tn.

How They Met The Park at Harlinsdale Farms

Many couples are able to pinpoint the exact moment they met their future spouse, remembering the butterflies and calling their friends about meeting the person they’re going to marry. Colin and Emily do not exactly have that, meeting on September 5, 2000, their first day of kindergarten. They spent the next 12 years together, all through elementary school, sharing the same friends, although Emily admits now that she thought he was the most annoying, nerdy kid ever, “picture a redhead in a white turtleneck, khakis, and running shoes in the Palm Springs, CA heat.” she says. Meanwhile, Colin says he was in love with Emily from the beginning and he and the other two boys in our group would fight over who spent more time with her after school. The park at harlinsdale farm franklin, TN

Fast forward to sophomore year of high school, Emily went through a lot of trauma and most of my closest friends walked out of her life. She never expected Colin to be the one checking in on her daily, making sure she was ok. While Emily cannot tell you that she had butterflies when she first met Colin, she can tell the moment she started to see him as more than just the nerdy kid next door. That summer after sophomore year, Emily, Colin Emily’s mom and Grandma went on a road trip see The Addams Family Musical, Emily began building this thought in the back of her mind that maybe there’s more here than what she thought. The next two years they of grew closer, and Colin asked her to prom on her birthday at the end of senior year, she accepted. One-week later Colin was driving Emily to therapy and asked her to be his girlfriend, it was in that very moment Emily knew, this red head nerdy boy accepted her for exactly who she was at that time, no illusions, no fronts that she was so used to putting up for the rest of the world, at that exact moment in time Emily knew Colin was her 1 and only person, soulmate, love.

7 1/2 years later, a few cities, and a cross country move later, enjoying just being silly and dorky together, Colin made it official by asking her to spend the rest of our lives together, in a way that was just as unique as their love story.

Colin and Emily had their 20th anniversary of being friends in September, and Colin had been trying to figure out how to propose for quite some time. He decided to take Emily out to dinner at their favorite restaurant, The Honeysuckle, to celebrate 20 years of being in each other lives on October 25th. While they were at dinner, Colin told her that he had bought a bottle of their favorite champagne to celebrate, as well finding a cute couples pumpkin carving idea as well, Emily loves to carve pumpkins and was thrilled that he had put in the effort to find ideas for them! When they arrived back to their apartment, Colin told Emily that he wanted to show her the pumpkin carving ideas, that he had already mocked up as an example. He asked her to close her eyes, and then he turned off the lights. When he told her to open her eyes, he was down on one knee with the ring in his hand, and on the counter were two pumpkins with “will you marry me” carved into them. Emily was in shock to say the least and asked Colin if this was a joke! When it finally registered to her, and she was able to process what was going on, she eagerly said yes!

We had been having unseasonal weather for Nashville TN, which involved ice and snow! After texting to confirm that Emily and Colin were able to make it to their session, she replied with a very energetic Yes! They were so excited that they had already made sure they could get out of their driveway with all the snow. We met at The Park at Harlinsdale Farm, located in Franklin, TN. This park has rustic characteristics, as well as a pretty creek located towards the back of the park. I loved being able to give these two the snowy engagement session that they had never even dreamed of (they are both originally from CA). Thank goodness it was not too cold out, and was bright, sunny and beautiful.

What a great session with Emily and Colin, and I am so lucky to be able to capture their story as it continues to romantically unfold. 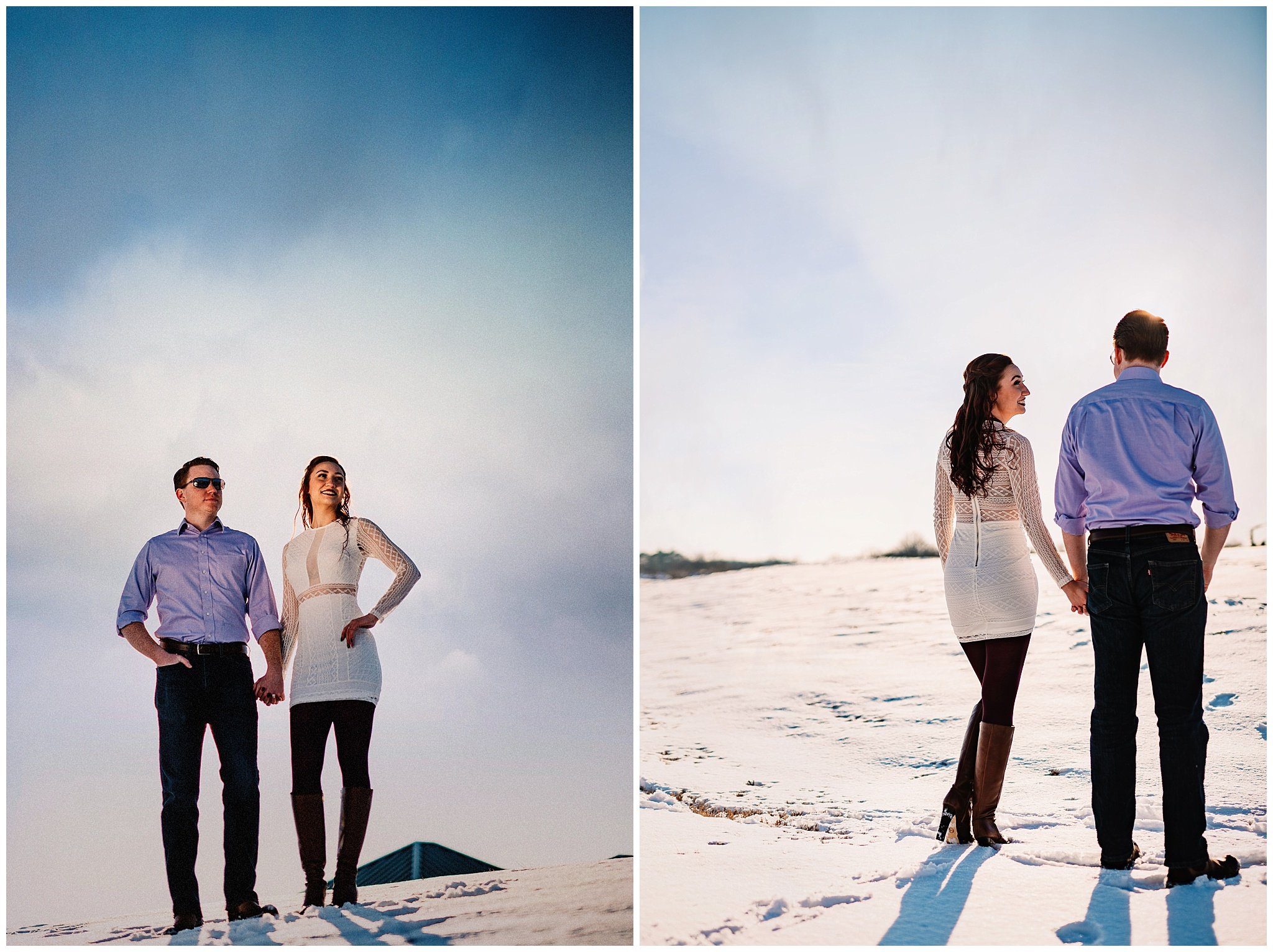