As a wedding photographer based out of Nashville, TN, and surrounding areas,  meeting cool couples like these two makes me giddy!  This couple was soooo cool and hip ( I’m always jealous of the people who can pull off hip without a hitch!) We did their engagement session in downtown Nashville, because 1- Its where they finally met in person, and 2- well… it is one of the coolest and hippest city in the world!

Mackenzie and Chance both graduated from The University of South Carolina from the journalism program.  Even though they were 3 semesters apart, they both hung out at the same pool in college, drank coffee at the same shops, went to the same sporting events, even had mutual friends, but never met!
.
Five years after Chance left Columbia, SC  and almost a year after Mackenzie did, they began chatting online through the dating app called Tinder. After chatting for a while they soon discovered that they had more than a few things in common, for instance they both had left South Carolina, and had moved to downtown Nashville, they both had adopted their dogs from the same animal shelter in South Carolina, and they had more than 50 mutual face book friends, and shared a ton of very similar college stories including parties that they had both attended! Crazy ! How did they never meet? There are countless times they should have met. But they did not, and it took 7 years to meet face to face! When they finally met at the Frothy Monkey ( amazing coffee joint, downtown Nashville ) they chatted for hours , and comparing even more college stories in where they should have met. We sometimes wonder why it took so long for us to meet the people in our lives, but Mackenzie and Chance believe it was absolutely perfect timing.

Chance proposed with his grandmother’s ring. He had been planning to propose, he even picked out a few rings and told his family he was going to,  but one day this past fall, when they were visiting his family’s lake property, his grandmother nonchalantly slipped a diamond ring into his pocket. It was hers. He was shocked. Mackenzie of course, had no idea. They drove home after that weekend and Chance was a nervous wreck, checking every few minutes that the ring was still in his pocket, and silently Mackenzie asked herself what the heck was he so nervous about!

Neither of them ever imagined it would fit her ring finger perfectly or be the style Mackenzie wanted, however Chance thought it would be a sweet surprise to at least propose with, and if it didn’t fit or wasn’t Mackenzie’s style they could adjust it, but the ring was just as perfect as the moment ! Through her blubbering tears of saying “yes” to his proposal, he told her it was his grandmother’s ring, and she was a woman who had helped raise him and who he loved more than almost anyone. More. Waterworks. A little confirmation that we knew this was right. The wait was over.

Since Mackenzie and Chance met for the very first-time downtown Nashville, and again Hip = Hip,  we thought it would be perfect for their engagement session. We started at around 5 pm, while it was still very very hot outside , but they both were troopers as they swirled around the pedestrian bridge and  we took over the city. I only found out later that Chance was suffereing from back pain, but he said he was having so much fun that he forgot about it for a moment.

Mackenzie and Chance will have a small backyard wedding  amidst Covid and will only their closest of family and friends. Plans change, but their love certainly does not. 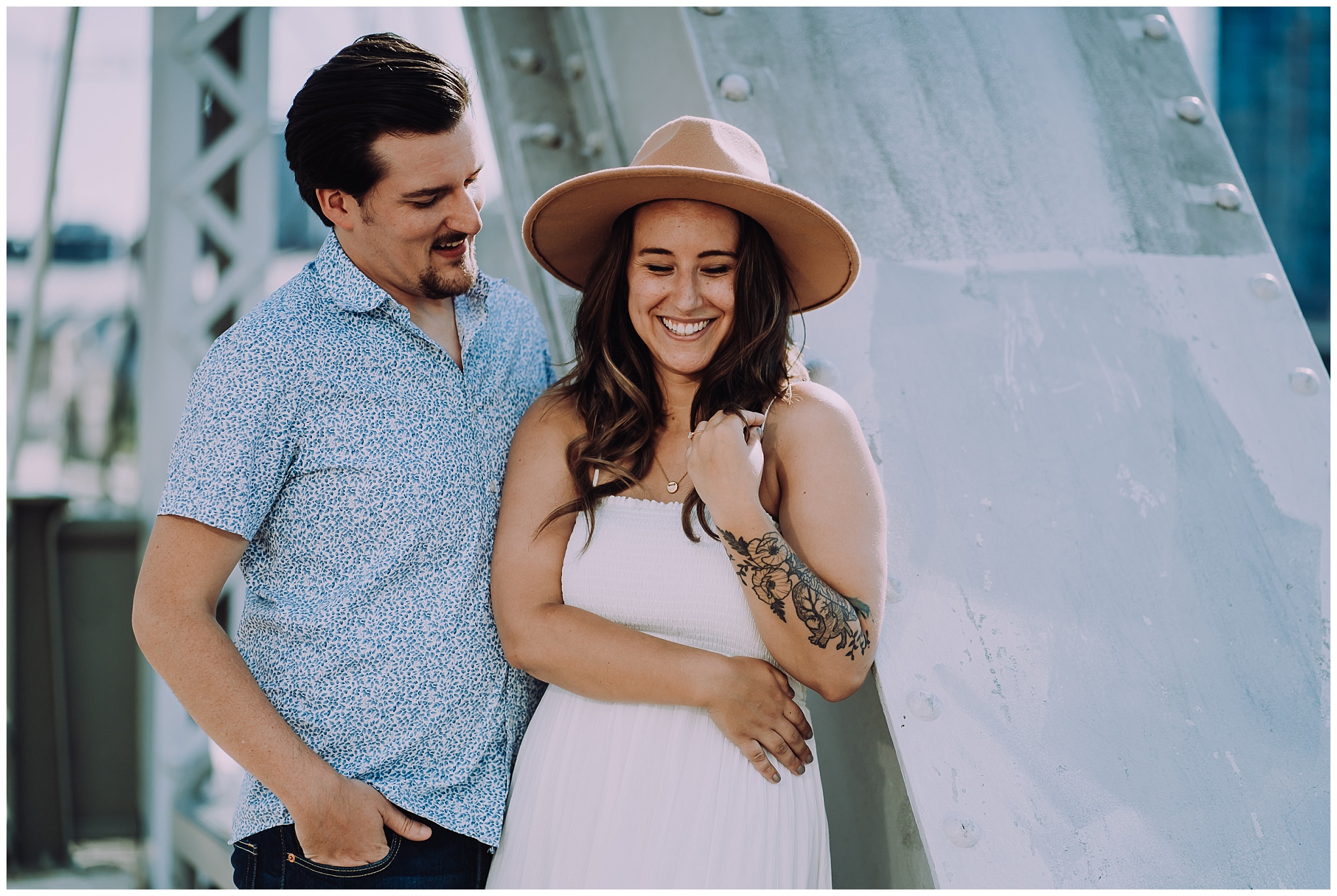